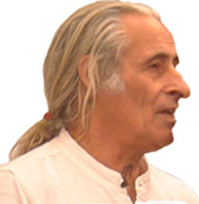 Sitting quietly in the Tao Garden some years ago in the days when I wore the ‘guru look’ I noticed a young man giving me the keen interested glances of someone seeing someone he thought might be a kind of highly evolved spiritual being. I was cultivating the long hair and dreamy countenance of one with his mind on higher things and accordingly bedecked with bracelets and bangles, ear-ring and beads, clothed in kind of ethnic trousers and one of those side-tied shirts that lend an aura of peace and serenity, not to mention the sandals. I’d recently attended a Vipassana retreat too, so obviously was looking pretty holy perhaps even fully halogenically enlightened.

The bow, or was it even a half-crouch, with which the young man approached showed the immense measure of respect with which he had decided to endow me, or at least the presentation of me that I was offering to the world at the time, and his first words uttered as if in a cathedral or perhaps just in the presence of a cathedral spirit caressed my ego.

“May I speak with you?” he said, sounding like an American. Graciously I inclined my head. He continued “I feel I can learn many things from you.”
“How can I help you?” I said in a conversational tone and, of course, my normal English accent.
His eyes, lowered until he heard my voice, looked up in a startled kind of way. “Where are you from?” he asked.
“London, England,” I replied with a grin.
His face fell as fast as he stood upright. “London? England?” as if speaking in perverted commas.
I tried the gracious nod again but it bounced off the wall of indignation forming around him as he looked angrily at my clothes, my hair, bracelets, beads and sandals, and took a step back.
“I thought you might have been from….I thought I might have learned something from you,” he said like a child welched on promised icecream.
“Learned something like what?” I was curious to hear.
“Something, oh I don’t know, wise stuff. Yeah, some wisdom.”
“Maybe you have,” I said after him, as he walked away under his disappointed cloud, seeking a distant truth.

You know what they say: nowadays the westerners are wearing the robes, the gurus are driving the Mercedes.

I got my hair cut, chucked the ornamentation, bought cool gear in Waikiki boutiques, signed up for NLP with Richard Bandler. Nobody mistakes me for a Native American medicine-man any more.

Thank you, young man. I’m glad to have learned something from you.

From Stress To Vitality NOW! Secrets of Love and Life Mastery for Men and Women

1 Response to The Look