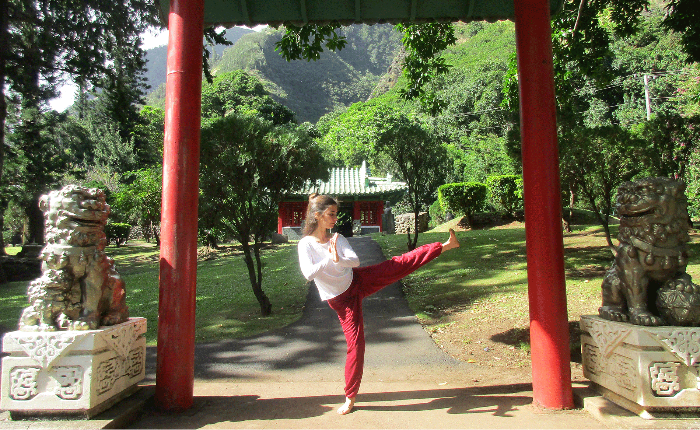 My Tai Chi journey took an interesting turn after an incident in India. I was with my partner Kris, from whom I just had started learning the Taoist Arts, inclusive Tai Chi, a few months before. Two men attacked us! One went to him and another went to me. He tried to grab me by the arm to pull me off the mountain path we were walking. I cannot tell if this took a few seconds or a few minutes, but I can just say that my instant reaction towards this man, double my size in height and weight, was a Tai Chi application. I twisted his arm in such a manner that he lost his strength!  If he didn’t run away the arm would be broken. I was blinded and suddenly became a warrior ready to fight.  Yet I’m totally pacifist and never been involved in a fight in my adult life, and I’m absolutely against violence.

Now my concern was, ‘Is Kris ok?’  And there he was, standing like nothing had happened. His attacker ‘flew away’ without return. These two men thought that an apparently old man and young girl would be an easy target, but got a surprise from a Martial Arts master and student. I got quite nervous as I was still trying to figure out “how did I manage to do this?”  As I cooled down I just said to Kris, ‘I’m happy you didn’t start anything’. I mean an ugly fight, that action of a man protecting a woman. He answered with this serene look in his face, ‘I won’t start it, but I will finish it.’  The awareness of a well-trained martial artist has of their own power, which can seriously injure or even kill a person.

What I learned from this experience was cellular memory. Even if you think you are not learning something, actually it’s going in. I had learned informally for a few months: perhaps the most intense training was on a beach in Thailand doing it every day for about two months, which was more fun than anything else, but never really took it seriously. That just happened after this attack, oh yes, after that the real training began! The other thing I learned or perhaps knew already, but experienced in a real situation was the inner warrior that is inside us that gives the power to handle any situation and to act instead of react.

Looking back twelve years ago when I start learning Tai Chi, I was definitely not good at it!
You learn the Qigong along with Tai Chi, which for me was easy. I become good at it very quickly: I had found some similarities with Yoga which I had done before.  Qigong was also known as ‘Tao Yoga’, but Tai Chi took me a few good years to grasp… And to start with, I just pursued it as it was a pre-requisite for my Taoist qualification as a Practitioner. Thinking, ‘Ok, let’s strengthen the character by doing something that’s difficult for me’.

After all, what really appealed to me in the Taoist Training was working in the body. Coming from a spiritual family, I was actually looking for something to give me grounding, which definitely deepened, even more, my connection with the Divine.  Nowadays I say: Rooted you are higher you fly (with no danger of feeling overwhelmed or spaced out), something that cultivated the health of my body, which lots of spiritual systems missed out, including the one of my lineage.

When I heard about Tai Chi for the first time, my immediate thought was, “Ha, the gentle movements you see old people doing in the park in China?” This was until I experienced it, and the profound effect of the movements in the body, the inner and outer strength of it, the calmness and sharpness they bring to the mind: and the boost of confidence, the deep connection with the Universe around you, a raising of the spirit.

Qigong and Tai Chi, beside the precise exercises which address and open specific parts of the body, contribute flexibility, suppleness, a deep sense of wellbeing, activating the meridians, the energy-flow channels in our body, feeding the organs that sustain our life, and enabling the bio-electro-magnetic force, Qi or Chi, to come on full charge.

But what is the difference between Qigong and Tai Chi?

Qigong is an internal martial art with the main focus on health and grounding, cultivating the qi/chi/energy, developing inner strength. There are hospitals in China using it as medical Qigong to support the healing of various conditions. The West also is taking interest in the matter and have done various studies proving the health benefits of Qigong and Tai Chi in the body and mind.
Tai Chi is originally a fighting art – Tai Chi Chuan. This internal martial art focuses on the self-defence movements which can be used in a fight, or in slow motion during the Tai Chi form.
Imagine a ballerina, her stage performance is the Tai Chi, and Qigong is the bar work, all the drills and body preparation.
So you can do Qigong without Tai Chi, but you don’t do Tai Chi without Qigong (I call this Tofu!), this is the warm-up and indeed the rooting which gives power to the Tai Chi movements, in which you blend the grounding and the flexibility.

Why Goddesses Do Martial Arts?
In Ancient China traditionally a Taoist Practitioner is one who does it all: meditations, sacred sexual practices “art of bedchamber”, shamanic practices, including healing, and the Martial Arts. For me Tai Chi, which means Ultimate Force, is the greatest Meditation in Motion, uniting us in perfect harmony with Earth below and Heaven above, yin and yang, with benefits on body, mind and spirit!  Tai Chi is the essence of Feminine Empowerment, connecting with higher and lower forces on the spiritual path, for self-defence or simply to harmonise with the environment and alleviate the effects of stress.

Sometimes I was asked with surprise: are you a Tai Chi Teacher?
Tai Chi was part of my Taoist Training, which I was initiated and followed in a traditional and fully holistic way. I ended up wholeheartedly dedicated to it and naturally it became a way of life.
Martial Artists/ dedicated students of the Taoist Arts, seem surprised by the sacred sexual practices (‘sexual’ here goes beyond sex, it’s our creative force which manifests in the different aspects of our life). So not all Taoist schools cover this aspect of the ancient and so rich Taoist Arts, with its 4000 years of refinement.

The spiritual aspect in the graceful spirals of the Tai Chi form took my connection with nature, the Universe beyond the visible, and even the mundane world, to a higher level of perception, contributing for a sense of harmony and ease, to looking outwards for answers and delving inwards. This comes along with my Jade Egg Holistic Practice.  Learn Tai Chi as shamanic theatre! The Way of the Hidden Masters gives a sense of reality to this ancient art as we emulate the heroes of then, the warriors, the fighting nuns (and monks), and priestesses (and priests).

“The sun rose on a grace, a flow, on faces as serene as at prayer as they stepped and spun, spiralled and thrust: Shamanic theatre enacted under the trees, celestial combat, rooted in Earth and played in the human dimension. Yang advances, Yin withdraws, Harmony prevails.” by Kris Deva North.

Another episode to reinforce that Goddesses Do Martial Arts
Once I was teaching a workshop for women. Another workshop for men was happening next door. Returning from my lunch break I was asked if I could do a “push hands” demonstration with an experienced and strong martial artist. Fine, there I was in my mini skirt, half of his size and definitely much lighter. In a few seconds we stood, and then I pushed him across the room; and off I go, left the room and went back to my workshop.
Why did I share this? Here the answer: ‘Size is never a true indication of muscular power and efficiency… The smaller usually makes up for the balance of power by his great agility, flexibility, and speed action.’ Adapted from Bruce Lee in his book The Tao of Gong Fu.
Bruce Lee had a daring and controversial approach, but the embodiment of his art proves him right. I found in him an inspiration, studying his teachings and applying it to my practice and sharing of it. He emphasises the importance of the yin as the yang in a fight “…the principle of gentleness – the art of neutralizing an opponent’s effort and minimizing the expenditure of one’s energy.”

The thing to add to the above in the specific “push hands” exercise is: when you really develop your center and rooting, open your perception to multiple realities (which comes along with higher meditations), and can be fully present in the moment, nothing can move you.  When I started I was the ‘Miss Butterfly’: you could move me with one finger. But when I understood, felt and embody the grounding and flexibility, my feet became roots, and the interesting aspect of it was that it became not only about holding a physical push but reflected in all levels of my life: as holding an emotional, financial or spiritual push; and holding them like bamboo in the strong wind:  it bends but doesn’t break, and when the wind ceases, the bamboo springs back stronger than before.

If you would like to learn more about this fine Taoist Art, for those in London we are starting the Tai Chi 7-week Winter (and only this year) Course for Women, or can be taken as random classes.  We always go back to the basics, which is fundamental to a new or advanced student, mastery of the basics in every discipline (I talk from my experience in martial arts, dance, and former player of competition volleyball), gives the springboard to develop and refine your own practice, and as a teacher I’ll be addressing the different adjustments to each level.
And this Summer: Kuan Yin Qigong Teacher Training in Portugal, a new retreat I’m launching with my creation, which besides grounding and centering, offers gentle, but profound exercises for the whole body, including the pelvis, hormonal balance and addressing specific women’s needs for radiant health, supporting their Tao of Feminine Empowerment.

Author, Meditation Coach, Teacher of the Taoist Arts.
View all posts by Kris Deva North →
This entry was posted in Uncategorized. Bookmark the permalink.